Read the interview in English

August, 8th  2014, we were fortunate enough to be able to interview Roger Gould, Creative Director for Theme Parks, Pixar Animation Studios and designer of the land Ratatouille at Disneyland Paris.

Who came up with the idea of designing a “Ratatouille”-themed attraction? How early were you involved and how did Walt Disney Imagineering approach you and your team to help create the attraction for Disneyland Paris?

In 2008, Tom Fitzgerald, the incredible veteran Imagineer who oversees the creative development for the entire Disneyland Paris Resort, started exploring the idea of a Ratatouille inspired attraction. As we do early on for all Pixar inspired Imagineering projects, Tom invited our Pixar Theme Parks team, led by producer extraordinaire Liz Gazzano and myself, to collaborate on every aspect of the attraction.

Anytime we think about creating an attraction based on a film, we ask, « What moment in the film do you want to experience yourself? » For Ratatouille, that key moment is when Remy falls from Gusteau‘s skylight and plunges to the floor of the kitchen and has to race around among the giant legs of the busy chefs and avoid all the dangers of a working kitchen. At first we explored creating the kitchen entirely as a gigantic, oversized set with dimensionally animated figures. While the scale was fun, we couldn’t figure out how to get the speed and dynamics that you experience in the film — the dynamics of racing across the floor, the speed of the chefs nearly stepping on you, the fast action of the cooking, and most importantly, Remy‘s acting and movement which are really zippy.

So after a year of that exploration, we decided to change course and design the attraction as a combination of enormous physical sets with immersive, original 3D animation. This promised to give us the best of both — the awe of being shrunk down to the size of a rat in gigantic sets AND the dynamics and speed of the characters just as you saw them in the original movie.

Animation but also scenery are the driving elements behind this attraction. How did you come up with the present storyline to blend these two forms of interaction together?

Once we settled on the approach, we had to work out the story in every detail. Tom is first and foremost a writer, and he established this wonderful simple, clear story: Remy invites us (as honorary rats) to a meal, but along the way, we have to avoid the obstacles and perils that Remy encountered in the movie.

Just as we do on Pixar films, we started by drawing beat boards — one or two drawings representing each scene in the story. Then a trio of Pixar story artists, Stephen Gregory, Valerie Lund and Sarah Mercey-Boose, boarded out the scenes in detail. We had these fantastic storyboard sessions with Tom Fitzgerald going over every detail and finding ways to make it better and better.

In the attraction, the timing is really precise, and since many of the computer animated scenes in the attraction have moving cameras that let the guests travel through the sets, we needed to work out the 3D camera moves. So our genius Theme Parks Supervising Technical Director, Tony Apodaca, brought the digital world of Ratatouille back online and Pixar’s lead 3D Stereo artist, Bob Whitehall, using the original sets from the film, worked out the camera moves for the attraction. Then we overlaid our story artists’ character drawings on the 3D camera moves. These 2D+3D storyreels were our blueprints and are incredibly close to the final animation — testimony to the power of all those story sessions we had with Tom early on. 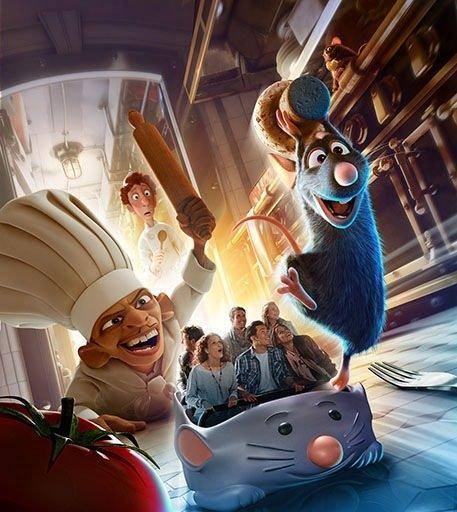 The ultra-high resolution, 3D stereo « Ratatouille » animation was created by Pixar uniquely for the attraction. Did Brad Bird collaborate on them too?

Of course, Brad Bird was involved with this project from beginning to end and that was terrific. It’s his movie, and our attraction story is in a slightly parallel universe to the film’s story, so only he could give us permission to bend his world. He is a huge fan of the Disney Parks, so he loved that we were bringing Ratatouille to life in the parks. We touched base with Brad every 3 months or so throughout the entire length of the project – from storyboards, to layout, to animation and lighting.

For example, in the queue, you see Gusteau‘s restaurant sign come to life and Gusteau speaks directly to the guests. Well, Gusteau‘s is now only a 3 out of 5 star restaurant, so Brad had this great idea to have Gusteau glance around and slyly hit one of the dead stars with his frying pan to light it back up. It’s putting those kinds of details throughout the whole experience that makes it so fun to do.

Brad has an incredible range of talents as a filmmaker, but his animation notes are simply brilliant. Our Supervising Animator, Andy Schmidt, was a lead on Ratatouille, so he and Brad have a great working relationship. So having Brad at our animation dailies working with Andy and the team was one of the best things on the whole project. Brad would pinpoint exactly how to get the best performance out of each of the characters.

Along with Andy, we had other Ratatouille veterans, like Kristophe Vergne who animated a lot of Gusteau and Linguini in the film. There’s a lot of both those characters in the attraction and Kristophe spent a year animating them for us. It was so fun because I didn’t need to tell Kristophe how to animate Linguini, he invented how Linguini moves! No one knows those characters better than he does. And his animation is absolutely amazing. 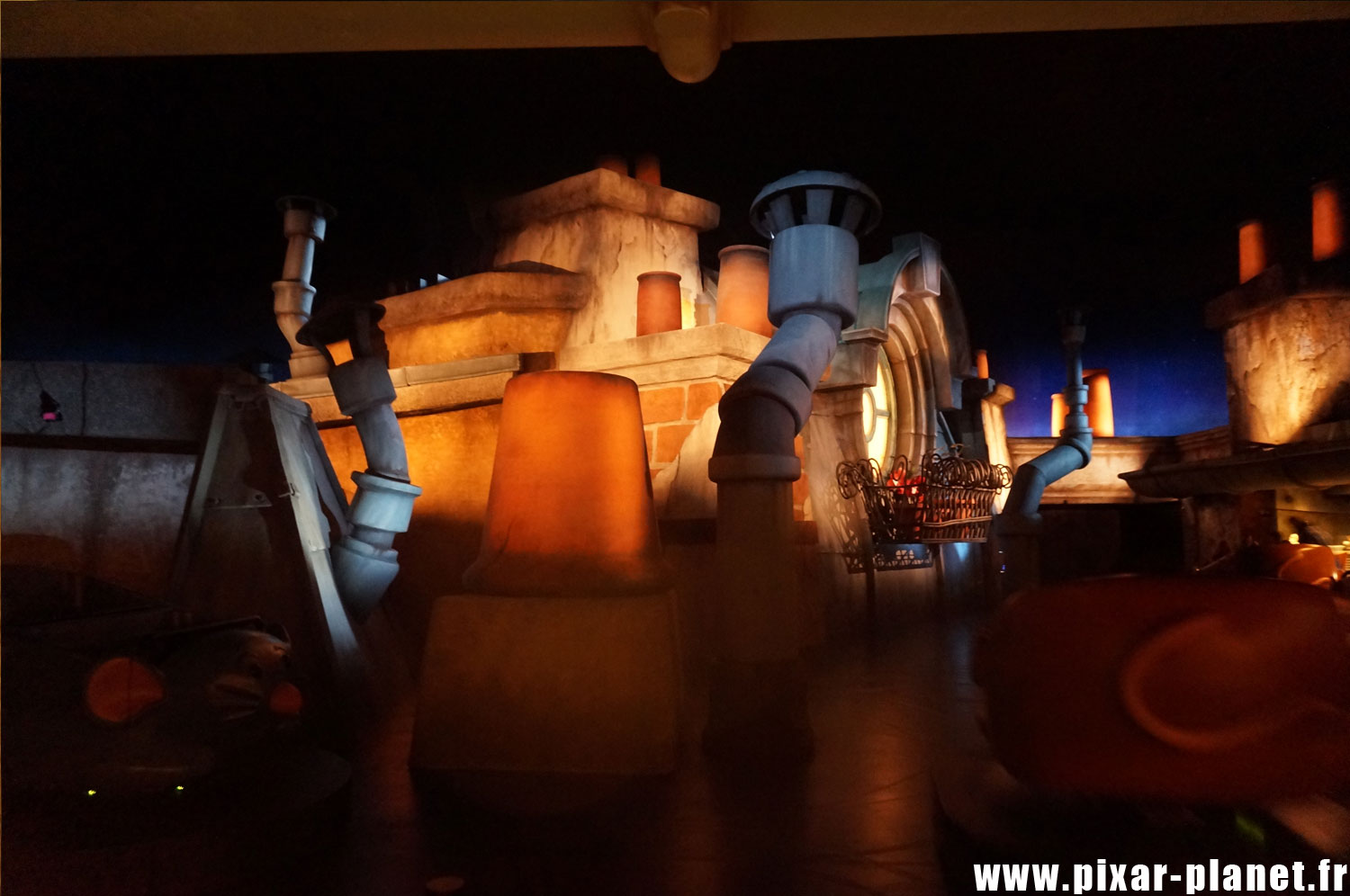 Place de Rémy is the immersive home of the Ratatouille attraction as well as the restaurant. How were you and your team involved in these?

One of the joys of my job is connecting the original filmmakers to the Imagineers. At the start of the project, we brought the Ratatouille Production Designer, Harley Jessup, in to give a talk to the entire Imagineering team on how the film style was developed. In particular, we all wanted to understand the film’s approach to the architecture of Paris. Harley explained he wanted to capture the hand made quality he sees in Paris, so each door, stone, ballastrade etc. were drawn by hand – no rulers – and those drawings were modeled in 3D, trying to preserve that hand drawn quality.

A member of Harley’s Pixar art department on the film, Robert Kondo, did a drawover pass on the Imagineering facade designs to help bring it into the vocabularly of the film. Once the architects had designed absolutely all the buildings, we had an amazing day with Harley working his way down this long, long hallway that was hung with every facade design. Harley went building by building making adjustments and drawing notes to make it all feel like it came straight from the film.

Our Imagineering Field Art Director, Beth Clapperton, oversaw every detail of the land, the attraction and the restaurant to ensure that all those details were executed perfectly. You can see Beth’s passion and talent everywhere you look. I am so grateful she was on the project!

Harley was just in Paris at Place de Rmey and he said it was mind blowing to walk into the world he had designed for the film. He is so grateful to all the designers and artisans who brought the world to life. 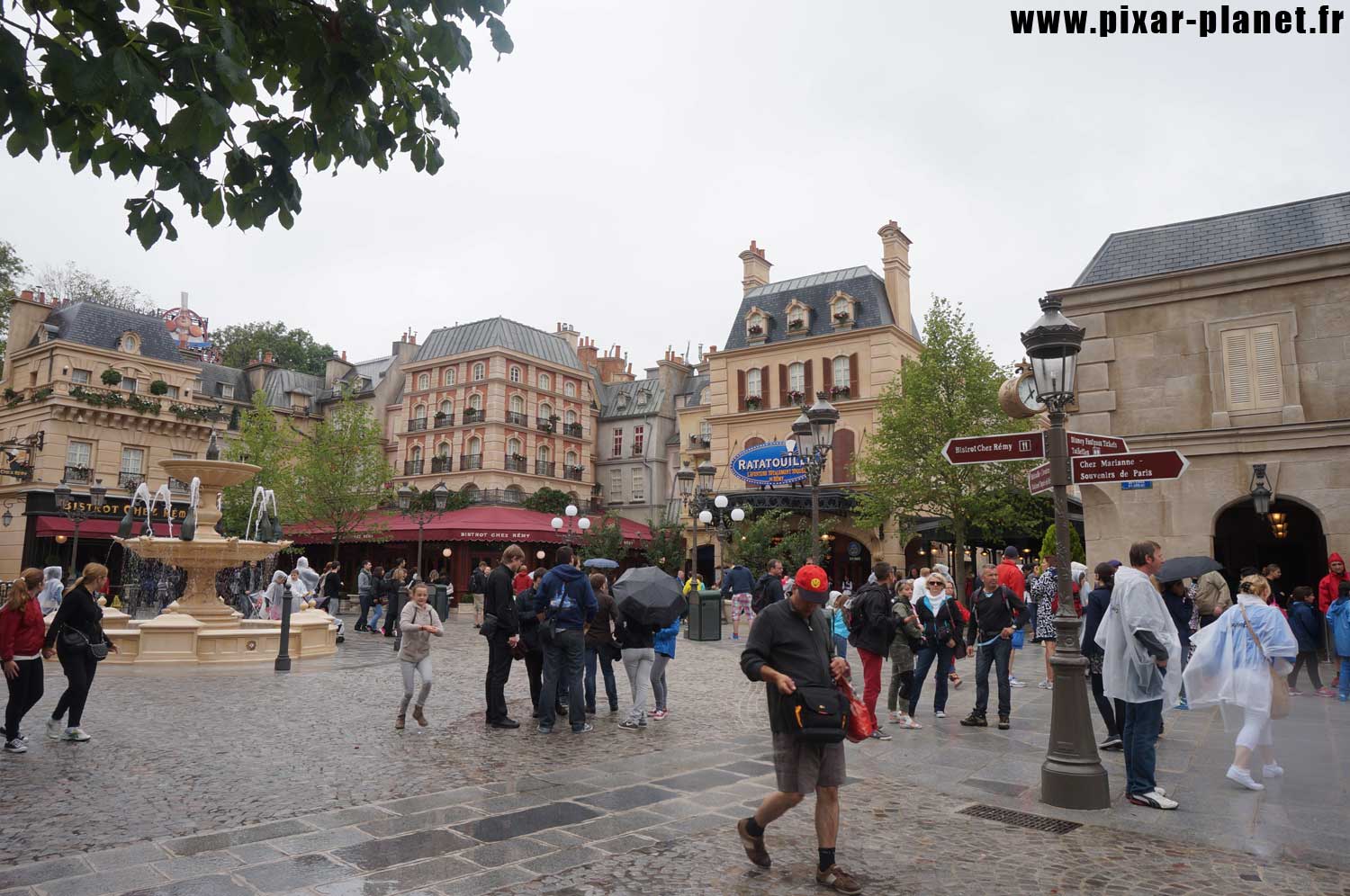 Was the restaurant always designed to be at rat scale rather than human scale?

Yes! That was one of Tom’s original concepts. The entire attraction is about Remy wanting to prepare a meal for us, so the perfect conclusion to the attraction is you get off and look right into Remy‘s restaurant where you can go eat the food he’s prepared!

I think Bistrot Chez Remy is the most immersive dining experience in any Disney Park. It is truly an extension of the attraction. Giant cork stools! Ramekin tables with jelly jar lids! Cocktail umbrellas 2 meters wide! How can you not love it? 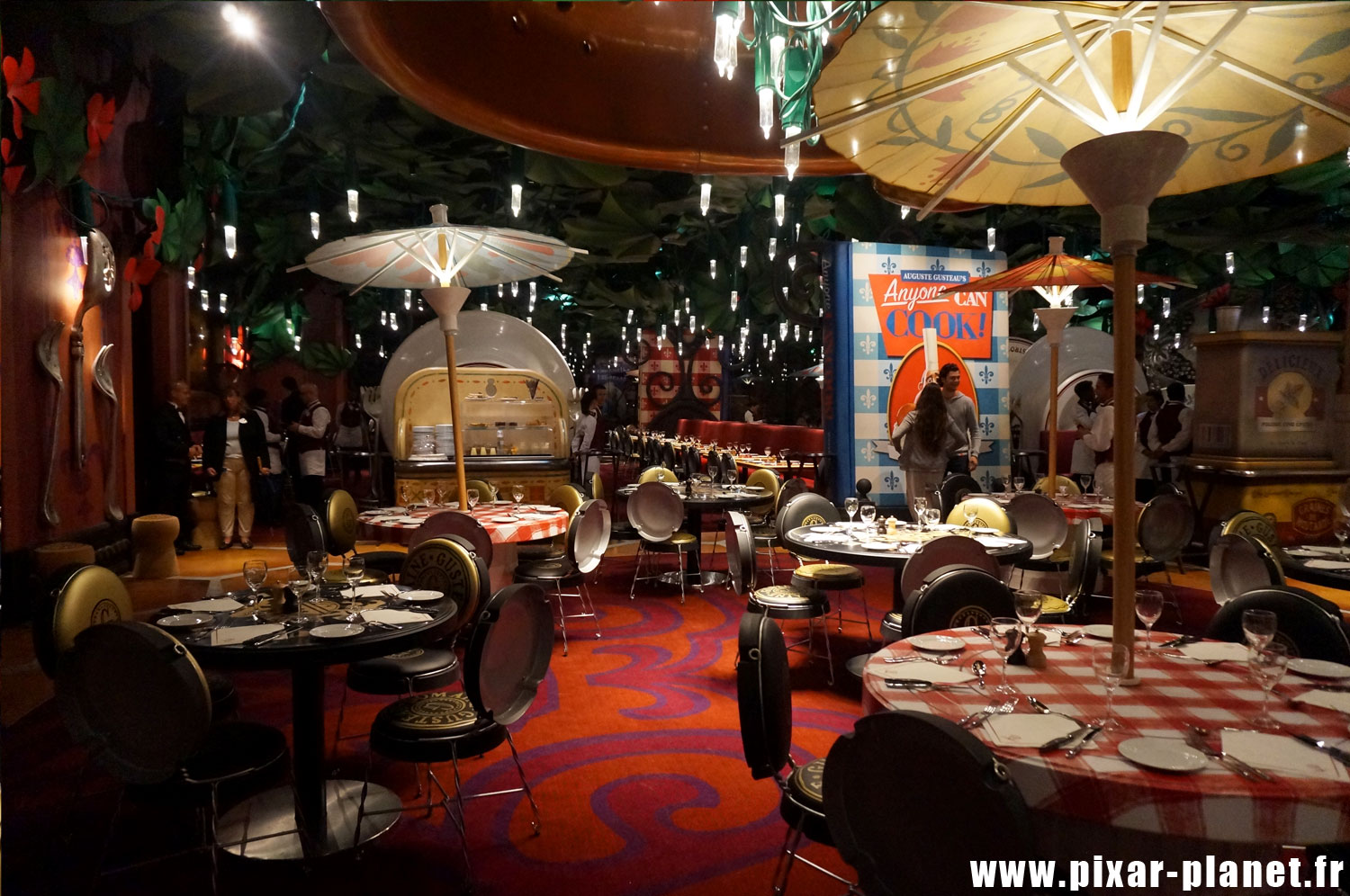 What fun anecdote could you share with us when it came to designing this new land?

From the very beginning, the idea of plummetting from Gusteau‘s skylight down to the floor of the kitchen was central to the attraction. This plummet is a combination of the new trackless ride vehicle and the immersive, 3D stereo original animation. But would you really beliee you’re falling 50 feet down at rat scale? We sure hoped so.

We designed all the animation with that idea. We reviewed it many, many times at a full size mockup at the Imagineering campus in southern California. But just a few weeks before the attraction opened, I was riding my last ride-through. This was it. Everything was in. Our amazing Show Producer, Chrissie Allen, invited the fellow who had overseen 3 years of the construction of the land and attraction to ride with us. He really had no idea what the attraction would be like.

So we took off in our rat-mobile, and when we plummetted from Gusteau‘s skylight down to the kitchen floor, he let out a yelp of surprise! As we went through the rest of the attaction, he laughed and gasped everywhere we’d hoped people would react.

Thanks to Rouger Gould and Pixar Animation Studios for this interview.